Saturday my best friend Ruth and I went to Olympic Beach in Edmonds to hang out and get caught up since we hadn’t seen each other in a while. We arrived at the beach a little after 5 pm.

The weather was sublime. It was about 71 degrees, there were only a few high hazy clouds, and a nice breeze was blowing off the water to make sitting in the intense June sun extremely pleasant. The lone picnic table was unoccupied, so we were able to nab it for our gab fest.

Right after we got there I saw a harbor seal sticking its head up to have a look around. Unfortunately it disappeared again before I could get my camera out. Dangit.

Not long after that Ruth noticed crows harassing a larger bird above the Brackett’s South beach and pointed it out. Sure enough, it was a bald eagle!

The eagle wasn’t flying that high and was mostly circling over the beach instead of the water. It flew off south and we thought that was it, but then it returned a few minutes later. It did that four or five times, but we never figured out why it kept coming back and was so interested that particular spot. Maybe someone had a small dog on the beach the eagle was eyeing as a potential snack?

On its last trip I finally managed to get a closer shot of it as it flew over us heading south again. I didn’t have my longest lens with me so this is heavily cropped, and I forgot to change to a larger aperture in the excitement so the ISO was too high, but this is still the best eagle in flight photo I’ve ever managed to get. Someday I’ll get a good one, I swear! 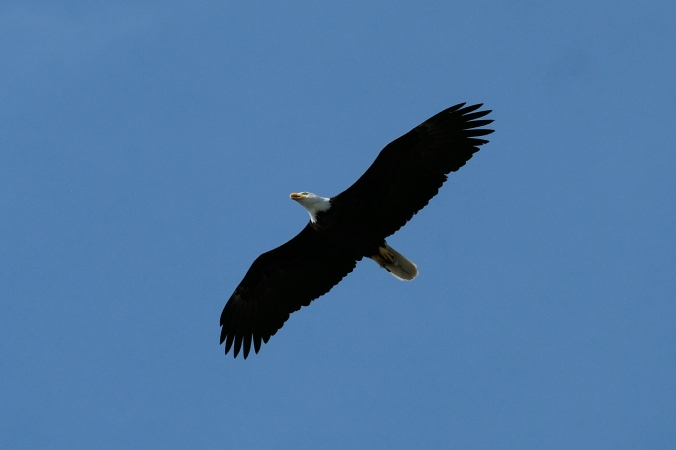 While we chatted and enjoyed the sun and sound of waves I set up my old camera on a tripod to make a timelapse. I started getting into timelapses last fall and it’s fun to try different things in different places. (I’m still using the free version of WordPress so can’t post videos for you to see it.)

This is one of the stills with the ferry docked and showing others out enjoying the beautiful evening. 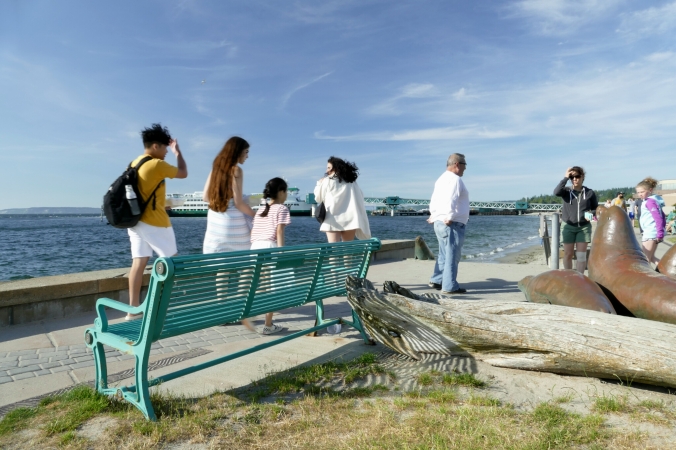 Before we left we had some photo fun with the statues.

After two lovely hours spent at the park we headed over to the Channel Marker Pub for dinner. It was doing a lively business, but service was still good. Ruth had the prime rib and I had the beef stroganoff. Yum!

It’s days like Saturday that make me so happy I live in Seattle.