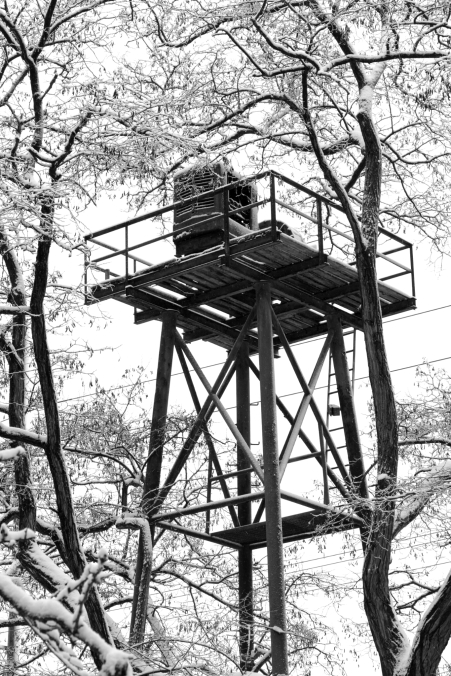 This air raid siren located on 1st Ave NE at Northacres Park is one of only two known left standing in Seattle, though both are non-operational. (The other is located in the Phinney Ridge neighborhood and has been repainted.)

The sirens were installed in the early 1950s to warn of nuclear attack. I believe this model is one built by Chrysler, nicknamed the Big Bertha. (So the gargantuan drill currently digging the Highway 99 tunnel isn’t the first Big Bertha in Seattle.) The Big Berthas were the loudest warning sirens of this type ever built and could be heard for up to three miles.

When I lived in Spokane from 1972 to 1974 the city’s air raid sirens still went off once a week as a test to make sure they stayed operational. I’m not sure when Spokane stopped testing them. According to an article in the PI about the Phinney siren, Seattle stopped testing and maintenance in 1974.

I suspect that the vast majority of people visiting Northacres Park have no idea what this structure is. You’d have to be at least forty-five-years-old and lived in a city that tested sirens weekly to easily recognize it.

Posted for the WPC with the theme of Danger!