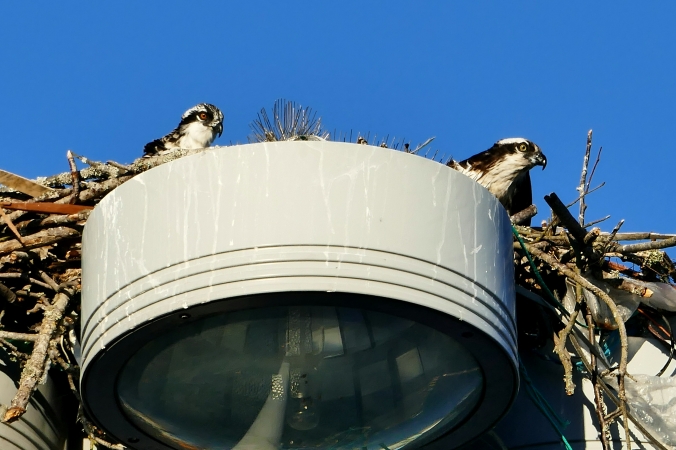 I stopped by Seattle’s Fishermen’s Terminal three weeks ago to get an idea of what it’s like there in summer and to take a few photos since I was already in the area. (I’ll be posting a preview within the next month.)

I was out on the Northwest Dock and a harbor master stopped his truck next to me. I thought maybe he was going to shoo me off the dock since I’d driven out and parked temporarily at the end, but he saw I was just taking photos and said I was fine. He was very friendly and we talked a bit about the terminal when I told him I was planning a piece for my parks blog.

He asked me if I’d seen the nesting eagles yet and I immediately perked up. I said, no, where? He pointed up to the top of the nearby light pole and I literally slapped my head that I’d missed it. Let this serve as a lesson to remember to look up occasionally, or you’ll miss good stuff.

When I saw the parent return to the nest while we were talking I realized they were ospreys, not eagles, but still just as exciting to see. I expect the three chicks have fledged by now, but they’ll probably hang around the nest while they’re learning to hunt, until they head south in September.

Wing exercises in preparing to learn to fly.

From farther away but with better angle on nest. More wing exercises as the parent feeds the other two chicks.

4 thoughts on “Osprey Nest at Fishermen’s Terminal in Seattle”