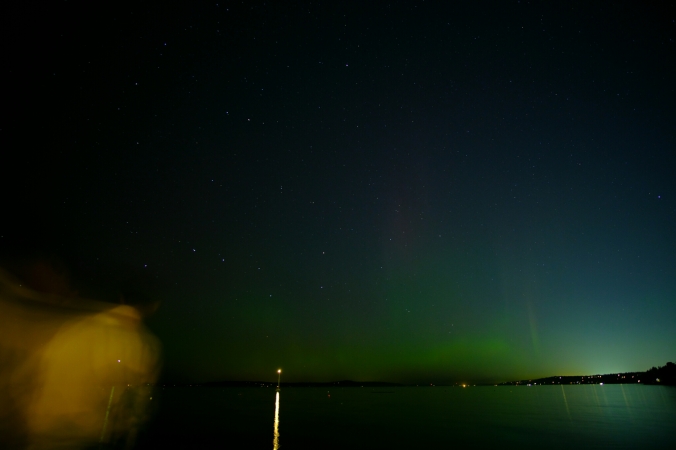 While I was shooting the aurora last September, a group of students from China joined us out on the breakwater. They just happened to be in the park when the lights started to dance and came over to see what all the hullabaloo was about. They got very excited, but couldn’t capture it on their cell phones, so were snapping pics of the images we were getting as we displayed them on the backs of our cameras for them.

One of the other photographers there spoke the same Chinese language the students did amazingly enough. So she was enjoying the opportunity to practice her language skills and pick up a few new vocabulary words. The students were tickled to randomly run into an American who spoke their language. I’d imagine that doesn’t happen very often!

Early on I had warned the students we were using wide-angle lenses, so they had to be careful of where they stood. It’s easy to think the camera won’t pick you up when you’re off to the side. This fellow forgot, and just as I started to say something he kind of jumped and then quickly moved back as he realized it on his own. I beckoned him to my camera and showed him his ghostly inclusion in the shot and we both got a laugh out of it.

Sometimes I keep photos that didn’t turn out because, even though they’re a failure as an image, they serve as a fun reminder of something about that day. In this case, that people from the other side world were there to share a wonderful experience with me.