My full preview for Commodore Park is here. It was already long, so this second post provides details about bird watching opportunities at this unique park.

There are better parks in the region for birding if what you’re after is variety. But for sheer fun and easy viewing Commodore Park is a great place to go for birds in Seattle. Spring and summer are the best seasons.

The great blue heron is Seattle’s official bird. They are year-round residents in Washington State and are found almost anywhere there is shallow fresh or salt water for them to wade and fish in. They breed in colonies in high trees near huntable water sources.

I knew from online reading that there was a heron rookery in the nearby Kiwanis Ravine, but hadn’t seen any mention of one at Commodore Park. Yet when I was looking at my park photos from my first brief visit I noticed nests in the trees in the distance.

Needless to say, I was excited to get a better look on my next trip now that I knew they were there.

The one month difference between my park visits in March and April meant the trees had more leaves and fewer nests were visible. But there was also more nesting activity by the herons.

The noises the herons make when the male returns with a new stick for the female to use building the nest or when a parent returns with food for the chicks is very distinct and fun to listen to.

My third visit to Commodore Park was at the end of June, and that time there were herons flying everywhere! What a glorious sight. Many of the earliest chicks had recently fledged and were practicing their flying and hunting techniques.

More than 50 nests are located in tall trees at the edge of the canal in between the east and west sections of the park.

The the east park picnic area and west park view platforms on the promenade are good observation spots.

Do not go into the trees to attempt a closer look. Herons that are disturbed during nesting season sometimes leave a colony en masse, abandoning nests, eggs, and chicks. So please be quiet and keep a respectful distance in order to preserve this precious piece of nature in our backyard.

Herons start returning to the colony in February.

Eggs usually hatch in April and May.

The young birds usually fledge (start flying and feeding themselves) in the latter part of June through the end of July.

The rookery is still usually active in August because of late hatchings and fledgelings hanging around their nests for up to a month.

Since the nests are so high up it’s difficult to see chicks until they are fairly large, and even then you will need binoculars or a telescope. You are able to easily see parents leaving and returning to the nests without optical aids. 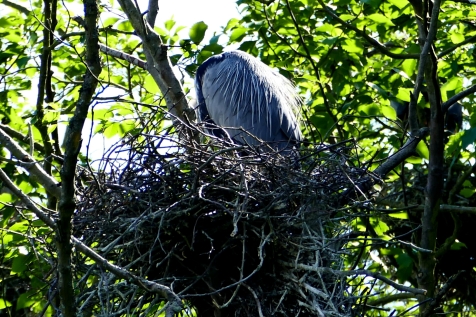 This day in April all the herons on their nests kept their backs to me.

Two herons flying over the locks.

Fledgeling that just landed back at the colony.

This Washington Dept. of Fish and Wildlife page has some good info about great blue herons.

The Heron Habitat Helpers usually host viewing parties at Commodore Park at least a couple times during nesting season. They set up telescopes and have people on hand to answer questions. Their events are free to the public.

Organized viewings are done for this year, but you can sign up for their newsletter at this link so you’ll know when they set dates for next year.

As Seattle Seahawks fans know (Go Hawks!), sea hawk is one of the alternate names for an osprey. Ospreys are migratory birds, spending their winters in South America. They are fairly common in most regions of Washington State near rivers, lakes, and salt water from April through September.

Ospreys are a bit tricksy because for an untrained observer they are easily mistaken for a seagull from a distance due to their wing shape when flying. It’s when you get a closer look at their size and coloring, or see the finger feathers on their wingtips, that it’s obvious you’re looking at a bird of prey.

On my first trip to Commodore Park I kept seeing a bird flying around near the bridge that at first I’d think was a seagull, but then thought could possibly be an osprey. But I never got a good look at it.

On my next visit to Commodore Park I was overjoyed to see an osprey fly right over me. It was only the second time I’d ever seen one when I knew for sure what I was looking at.

When I got home I looked online to see if I could find any info about osprey nests near Commodore Park. Imagine my surprise when I discovered there is a nesting pole right there in the park! I hadn’t been over to the west side of the bridge yet, so hadn’t seen it.

There used to be a tall telegraph tower on the Salmon Bay Bridge and ospreys built a nest on it in 2009. Unfortunately, the tower was 90 years old and in bad shape, making it a safety risk. It had to be removed in 2011, which meant removing the nest also.

A joint plan was hatched (ha, ha) between Seattle Parks, Wa. Fish and Wildlife, Seattle City Light, and BNSF Railroad to build an osprey nesting pole in Commodore Park near the bridge in the hope that returning birds would deem it a suitable replacement.

A 70 foot pole with a 4×4 foot platform and perch was erected before the 2012 nesting season. The platform was seeded with starter sticks to signal to returning ospreys, “Sorry about your old nest, but hey look, this is a really good spot.” The nesting pole has been a success.

Things to know about Commodore Park ospreys in Seattle

Ospreys usually return to the Seattle area to mate and nest in March or April.

Eggs usually hatch in May or June.

The young birds usually fledge by the end of July.

The fledgelings usually remain around the nest through August as they learn to fly and hunt.

The birds usually leave for the south in September.

Because the pole is so high, you can’t see birds when they are down in the nest. But if you have some patience and wait around, you will eventually see them coming and going at the nest pole, or see them perched.

With the same patience you can also often see them flying along the canal or overhead from anyplace in the park, especially when in the west section.

Osprey flying over the canal in June.

All About Birds osprey page.

Birdweb osprey page. (Birdweb is the Seattle Audubon website and is a good resource for info about birds that is specific to Washington.)

While the herons and ospreys are the most exciting, there are other birds to be seen at Commodore Park. The two most obvious are crows and seagulls.

Crows are ubiquitous in the Seattle area. I can’t walk outside my building without seeing them. But what makes them interesting at this park is that at low tide they come in and feed on mussels attached to exposed rocks along the shoreline.

Washington Dept. of Fish and Wildlife page about crows.

Seagulls are also seen everywhere. But if you really enjoy watching them fly like I do, Commodore Park is an excellent spot for that.

The gulls tend to fly in large circles over the canal by the Ballard Locks. They also fairly often fly lower than the canal promenade, which gives photography enthusiasts a chance to photograph them from above while in flight.

I haven’t made much effort to ID the seagulls I’ve seen there, but it’s safe to say that at least three species hang out in the area.

The Barrow’s goldeneye is another frequent feathered visitor at Commodore Park. They are striking looking diving ducks, and they are commonly seen around Puget Sound from November through April. After that most of them fly north or east into the Cascade forests to breed.

At the park they appear to really enjoy the water passage between the park shore and the railroad bridge structure. On my park visits in March and April sizeable fleets were paddling around and feeding. They were also probably eyeing potential mates. 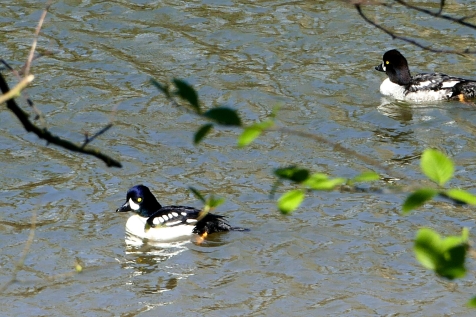 The common merganser is another diving duck I’ve seen at Commodore Park. (They are ducks, but have long, pointed beaks rather than the typical duck bill.) Common mergansers prefer fresh water, but are often seen on Puget Sound and in estuaries like Salmon Bay in non-breeding seasons.

This is hardly an exhaustive list of the birds you can potentially see at this park. I’ve only mentioned those I have personally observed. From online reading I’ve done, apparently cormorants and bald eagles are often seen there.

In addition to birds, you can also sometimes see sea lions swimming around the bay looking for salmon or steelhead to munch on.