I went to Magnuson Park to watch and photograph the lunar eclipse last night, along with several hundred other Seattleites. It was quite the experience.

I still vividly remember my first lunar eclipse. My first job in Seattle was as a delivery driver on graveyard shift. It was in the wee hours, near the beginning of my route, and I started getting a little freaked out because the moon seemed to be slowly disappearing. It finally dawned on me what was happening, but it took a while for the realization.

Since then I’ve seen several partial eclipses. While I now know immediately what is happening, it’s still a rather spooky experience. Sunday was the first time I’ve ever set out specifically with a plan to watch an eclipse.

I did a good job of timing my arrival at Magnuson. Moonrise was at 6:54 pm. I got to the park at about 6:15 and easily found a parking space close to my destination near the boat launch. There were quite a few people already there, some having set up family picnics, but that was no hint as to the crowds yet to come.

I had expected other people, but had absolutely no idea that literally thousands would be flocking to parks around the city. It felt like I was at a fireworks display or an outdoor concert. The lawn filled up with chairs and blankets and many more people sat on logs and stood in groups. At the end the outdoor concert vibe was enhanced as bumper to bumper cars left the park’s several parking lots in an endless stream of headlights.

When waiting for the start no one around me seemed to know where on the horizon the moon would come up, so everyone just kept scanning for the first sighting. Long past the time of moonrise there was still no sign of the moon.

Finally someone called out, “There it is.”

There was so much haze on the horizon and the sky was still so light from the just set sun that the moon wasn’t visible at all as it first rose above the mountains. It was a ways above the horizon by the time it was sighted, and extremely faint since it was already in full eclipse. As the sky darkened and the moon rose higher it became more and more visible to the naked eye.

Meanwhile I started taking photos. The moon was much more distinct with my camera than with my eyes, as the telephoto lens helped cut through the haze, and the bloodmoon red was quite apparent on the view screen after adjusting for exposure.

I had come prepared, or so I thought. I had my sturdy tripod set up. The wireless remote shutter release was attached and functioning properly. After a few tests and adjustments I was happy with ISO, aperture, and shutter speed.

Unfortunately, I apparently suck at focusing during a lunar eclipse. My autofocus was useless. Too little light being reflected from the moon was giving my camera a mini nervous breakdown, so I thought no big deal and switched to manual focus.

But despite checking focus several times, almost all of my photos are blurry. Only the two posted here as sunlight was returning to the moon actually turned out kinda sorta sharp. Most of my pretty bloodmoons are blobby. (Insert some disappointed photographer tears here.)

Edit to add:  I have since learned that the problem wasn’t focus but motion blur! I was shooting at around 5-6 seconds, but the moon moves too quickly across the sky for that when using a telephoto lens. Depending on focal length, two seconds is the longest you can safely use. For really long lenses you need to get it down to one second or less.)

Halfway through I also discovered that I had accidentally set the exposure compensation. (On my camera that setting is extremely easy to change when not intending to. Very frustrating.) So all the pics that looked perfectly exposed on my camera screen were actually too dark! And of course, I could not figure out how to change the setting back to normal in the dark.

At least I wasn’t having as much trouble as the couple standing behind me. They arrived very late and they both had fancy cameras, but neither of them seemed to know anything. They kept up a running conversation about nothing on their cameras working and how do they fix it. One of them kept using flash until I finally said something to them, irritated by the bursts of blinding white light. (They didn’t seem aware of the fact a flash will not illuminate an object located 225,000 miles away. Or maybe they just didn’t know how to turn it off.)

The moral to my story and theirs is: know your camera really well before using it in the dark. I now have to wait until 2018 to try and do better.

The night can’t be considered a loss though. Despite my usual dislike of crowds, it was a good feeling to be gathered in a communal spirit to enjoy a special evening outdoors. Everyone was very friendly and a good time was had by all. The moon was eerie and beautiful.

The mountain was out. 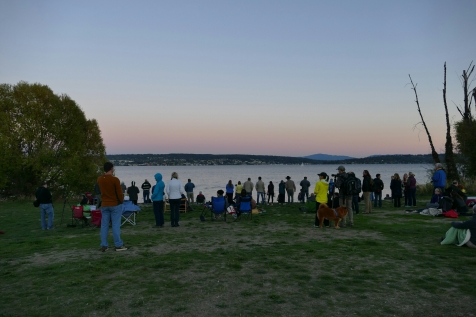 Before the crowds showed up.

After adjusting for exposure with the light sky. But too dark! 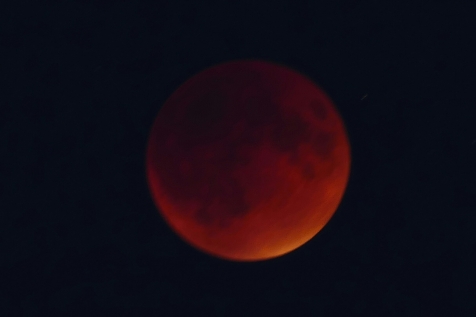 Sunlight returns to the moon.

16 thoughts on “Photographing the Bloodmoon”